This is going to be a bit of a long one, so maybe get yourself a cup of jo and get comfy. FALA has an updated position statement, but we want to explain first how we got to this decision. So please read the following carefully.

Most certainly you have now heard of the news about SNC-Lavalin and the resignations of Jody Wilson-Raybould, the former Justice Minister and Attorney General, and Jane Philpott, the president of the Treasury Board. Those really in the know will be aware that Minister Qualtrough has been appointed the Acting President of the Treasury Board. Yup – that’s our minister with the responsibilities now of public services, procurement, accessibility and the treasury board.
Media heads having been talking about this situation for days… you may be asking what this has to do with FALA and do we really have to talk about this topic even more? Well, ya, we do. These shenanigans could affect us all.
Here’s the thing. The busier and more distracted the government gets, the less time they have for passing bills. And if things really go off the deep end, the Prime Minister could call an early election. If he does that, everything we have worked for dies on the order paper. For some of us that is close to three years of work on the development of Bill C-81. For others, it’s a lifetime of work.

Things are moving slowly at the Senate. The senators are still in second reading debate. As long as a senator wants to talk on Bill C-81, the debate will continue. The Senate only meets for one week in March. The next person to speak is scheduled for March 19. Both the Senate and the House of Commons are scheduled to rise sometime in June. If Bill C-81 does not receive Royal Assent before the Senate and House rise in June, our opportunity to have an Accessible Canada Act is lost until a future government reintroduces a new bill.

Timing is tight to turn our Bill C-81 into the Accessible Canada Act.

We have felt the pressure of the timing. We have continued to work on our recommendations.
For our “Establish an effective complaints process” recommendation we had asked the government for a Complaints Summary Report to be made public so people could know which federally regulated entities were getting the complaints, and how many complaints were being received. We have since been advised by the government that this is included in Bill C-81 and we will have this public report. Good, we say.

We have also found out that the various federally regulated entities responsible for managing complaints (Canadian Transportation Agency, Canadian Radio and Television Commission, Canadian Human Rights Commission and Federal Public Sector Labour Relations and Employment Board) have started meeting to establish a common approach to managing complaints. FALA is contacting each of these entities to ask how and when and where they plan on involving people with disabilities in designing this process. We are also interested in knowing if there will be a central registry and tracking for all the complaints. We will let you know what we hear back.

In our “Address All Barriers Equally” recommendation, we asked to include in the preamble of Bill C-81 a commitment to assist people who experience multiple and intersecting forms of marginalization and discrimination. FALA is re-wording Section 6B of Bill C-81 to address this area. We will give this change to the Senate Committee if/when we appear before them.

For the “Recognize ASL/LSQ language” recommendation, we have been told that it should be in the standards and regulations. Many other countries have recognized sign language in their federal legislation. Canada, however, is complicated because we have the Official Languages Act (1969) that gives English and French equal status as the only official languages. These two languages have preferred status in law over all other languages. But we are asking that Bill C-81 recognize ASL and LSQ as the languages of people who are Deaf with full and equal legal and civic recognition, protection and promotion. This will give Deaf Canadians equal access to the federal government by making information, communications, and services available through the use of ASL and LSQ. But we haven’t given up.

We are now recommending that recognition of ASL/LSQ language be included in Bill C-81 through amendment or in the preamble of the bill. The preamble is important because it sets the tone and intent of the bill. We are looking at wording from different countries and the UN. We will also present this rewording to the senate committee if/when we are before them.

All this being said, the FALA Leadership Team has agreed that the most important recommendation that FALA can make to the Senate right now is: pass Bill C-81.
If we don’t get the Accessible Canada Act now it could be years before we are at this point again – we are on the cusp of making history with the first-ever Accessible Canada Act. But if Bill C-81 does not receive Royal Assent before the election break, this will set our movement back no matter what party gets in next time.

The FALA Leadership Team appreciates this position is a compromise. Even after the bill is passed we will continue to push for our recommendations to be incorporated in the standards and regulations and through amendments in the Act itself. But for now, we believe that having a new law to work with is in the best interest of people with disabilities in Canada. Then we will work hard to strengthen the law over time.
FALA is developing a toolkit you can use to present your opinion on all this to senators and MPs. The toolkit will also provide resources you can use to explain the strong points of the proposed Accessible Canada Act and how it will help remove existing barriers and prevent new ones being created. We will let you know when this is available.

As always, FALA welcomes your input, feel free to offer us your feedback.

In June, Canadians celebrate National Indigenous History Month to honour the history, heritage and diversity of Indigenous peoples in Canada. It is also an opportunity to recognize the strength of present-day Indigenous communities.

Please reread the interview and article with Bob Joseph, President of Indigenous Corporate Training Inc on  – Indigenous Terminology Indigenous Peoples Guide to Terminology, Usage Tips & Definitions that was published in the Canadian Audiologist in 2019.

A reminder this webinar will be recorded and available to CAA members for free.

The Third party committee continues to meet biannually with DND, NIHB, RCMP and VAC in order to provide input into their programs to improve service to our mutual clients.  Please see the minutes from the 2020 virtual meeting in May.

Listen to the Podcast  HOW TO HARDSCAPE with Marshall Chasin, AuD

Listen to Marshall Chasin, AuD as he speaks on the podcast HOW TO HARDSCAPE with Michael Pletzn .

Today’s episode, we dive into the first of our three health topics this week with Marshall Chasin, AuD. He speaks with us our protecting our hearing on a job site. 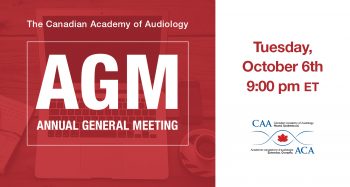 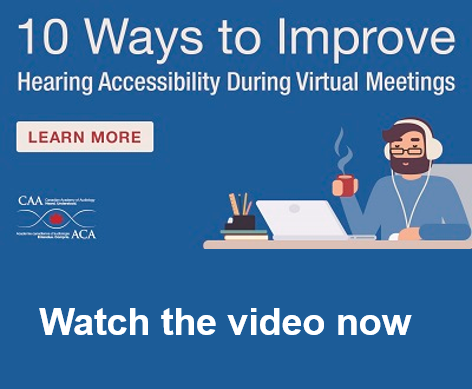