Every year Canadian Academy of Audiology, (CAA) honours people who have made significant contributions to the profession of Audiology. We invite you to help us identify deserving candidates by submitting nominations for consideration.

Nomination Procedure
Nominations may be submitted by any member of the Academy, and also need to be seconded by a member. Nominations for the Jean Kienapple Award can also be made by non-members.

Nominees do not have to be a CAA member to be considered for these categories.

Nominations must include the reason for nomination with sufficient detail on the nominee’s training, background, experience, and outstanding aspects of their professional career. This will allow the Awards Committee to evaluate the nomination. For the Jean Kienapple Award, nominations should include testimonials from clients or other individuals impacted by the nominee.

*Student Awards, and the President’s Award have separate nomination procedures. 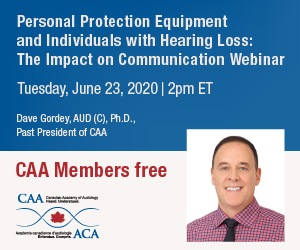