Get Involved! Become a CAA Board Member!

Our Mission: The Canadian Academy of Audiology (CAA) is dedicated to enhancing the role of audiologists as primary hearing health care providers through advocacy, education and research.

CAA is looking for a strong advocate to become involved in providing leadership to our profession. We are looking for individuals with a strong sense of determination, energy, and enthusiasm to become active in the continued success of our organization. The Board of Directors is comprised of audiologists with a broad range of skills, specialties, and professional experience from across Canada.

What are we looking for in a Board Member?

What does CAA need from Board Members?
Positions are for a three-year term starting September 2022 following the AGM. A second 3-year term is taken by most Directors.  There is an in-person planning meeting once per year at the CAA Conference and virtual meetings throughout the year. All Board Members are unpaid volunteers and are expected to participate in Board meetings and project activities of the Board and its committees.

How can you become involved?
Download the CAA Board Nomination Form 2022 and return to dorcas@canadianaudiology.ca by the deadline below. Please attach the candidate’s resume and cover letter and be sure they tell us why they want to become a Board Member. CAA will also accept self-nominations for Board positions.

CAA represents a broad range of geographic locations, Audiology specialties and employment types.  To ensure that this broad mix is maintained we are looking for individuals to represent skillsets we will be missing next year due to retirement of some board terms.  This year, preference will be given to Audiologists with strong interest and specialty in Paediatrics.  Priority will also be given to private practice clinicians who work in or own private practice clinics.

Recommended due date for nominations: June 9, 2022

“I asked myself why somebody doesn’t do something; then I remembered, I am somebody”. ~ Anonymous

Get Involved! Become a CAA Board Member! News

Following this presentation, participants will be able to:

A large majority of hearing aid candidates either do not have, or do not often wear their hearing aids, and studies have indicated that one factor for low hearing aid uptake is lack of counseling and support from the clinician. Ryall, Jenstad, et al. (2021) explored ways to improve verbal and visual aspects of informational counselling during REM and found that clients want to know more about the REM process. Clients asking to know more about the REM process, along with the availability of visual counseling tools, is an opportunity to maximize how counseling is conducted and the first step is to better understand the verbal aspect of counseling during hearing aid fitting.

This project, Counseling during Real-Ear Measurements: The Clinician Perspective, is for a Master of Science thesis. The purpose of this study is to investigate clinicians’ views on what information should be conveyed during REM informational counseling. By participating in this research, you may help provide support for new clinicians who are learning to conduct REM. 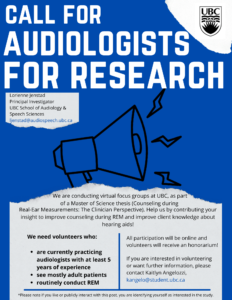 On August 18, 2022, I gave 12 interviews for CBC radio across the country from Newfoundland to Vancouver and even Yellowknife (where it is still quite warm and the radio host even went swimming in a lake last night).  Over The Counter (OTC) hearing aids were first discussed more than a decade ago and the FDA in the US just posted its final ruling that as of October, OTC hearing aids will be available for sale.

The interviewers all had the same six questions:

I answered each of the questions with the following narrative:

The reason for the FDA decision- which involved input from consumer groups, physicians, and audiologists- is based on accessibility for those Americans who could not afford hearing aids.  Not wearing hearing aids for those who need it would result in withdrawals from social situations, and is correlated with cognitive decline. This is less of an issue in Canada because of the many provincial and territorial funding schemes and/or provincial tender programs in place.  I emphasized that the cost of hearing aids is made up of two components- the actual hearing aid and the audiologist fitting, counselling, and verification.  And it is the verification that is the most important and this is something that OTC hearing aids would not have.  It is possible (with OSPL90 values on the order of up to 117 dB SPL) that actual generated sound pressure levels may be great enough to cause further hearing loss because of the lack of verification and control.

Other than the obvious risk of OTC aids that they may generate sound levels that are excessive, the person who forgoes an audiological assessment would not have the counselling, provision of appropriate accessories (such as remote microphones), and other aural rehabilitative measures.

I commented that I didn’t think that the larger market with OTC hearing aids would foster a technological boom.  If anything, the OTC hearing aids would be similar or lower technology than what our clients would normally be using.  And relative to that, regarding the cheaper price tag, while the initial outlay would be less, if the sound was harsh or hollow or just “not right”, there is no recourse, and this less expensive hearing aid would end up in a drawer rather than on a person’s ears.

When asked whether Canada should consider OTC hearing aids, I answered in two ways:  We have no regulations in Canada that would prevent big box stores from carrying personal amplifiers however they wanted to market them- as a PSAP or OTC or otherwise, but the other answer I gave when asked this question for some of the interviewers was the single and curt word “No”.

Facing thousands of lawsuits from U.S. service members who said 3M earplugs failed to protect their hearing, the manufacturing giant announced it is committing $1 billion to a trust to resolve the suits — and that Aearo Technologies, the 3M unit that made the plugs, is filing for voluntary bankruptcy as part of the plan.

The announcement comes three years since the start of the service members’ litigation, which contends 3M’s Combat Arms earplugs were faulty. Since then, 3M has prevailed at six earplug-related trials and lost at 10; as of the most recent case, decided in May, 13 plaintiffs have won almost $300 million in judgments against the company. 3M has not paid out on those cases, instead choosing to appeal the verdicts. 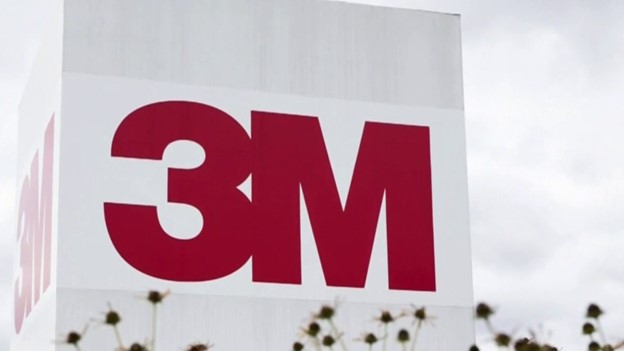 “We determined that taking this decisive action now will allow 3M and Aearo Technologies to address these claims in a way that is more efficient and equitable than the current litigation,” Mike Roman, 3M’s chief executive, said in a statement.

Previously, the company had said the product “was safe and effective to use when properly fitted and that 3M provided instruction to the military on the proper fitting and use.”

Lawyers representing service members characterized 3M’s move as inadequate. “The trust to resolve earplug litigation claims is woefully underfunded and not the ‘efficient and equitable resolution’ that 3M is desperately pretending it is,” Christopher Seeger, of Seeger Weiss LLP, said in a statement. “We expect to raise several arguments in the bankruptcy court as to why this petition should be denied.”

“3M believes each veteran’s hearing damage is worth less than $5,000,” said plaintiff Joseph Sigmon in a statement, after learning of 3M’s $1 billion trust. “Would 3M CEO Mike Roman want to lose his hearing in exchange for $5,000? Our fight has just begun, and 3M will regret taking on those who served our nation and defended the values 3M treats with such contempt.”

NBC News shed light on the earplug cases in May by interviewing Sigmon, a former field artillery specialist who served two tours of duty in the Army — Iraq in 2006 and Afghanistan in 2013. After Sigmon returned home to North Carolina from the battlefield, he said he started to notice a low and constant ringing in his ears; he was diagnosed with tinnitus. “I remember me and my buddies talking about the earplugs aren’t working,” Sigmon told NBC News. “When you would fire your rifle, you could still feel a pinprick in your ear.” 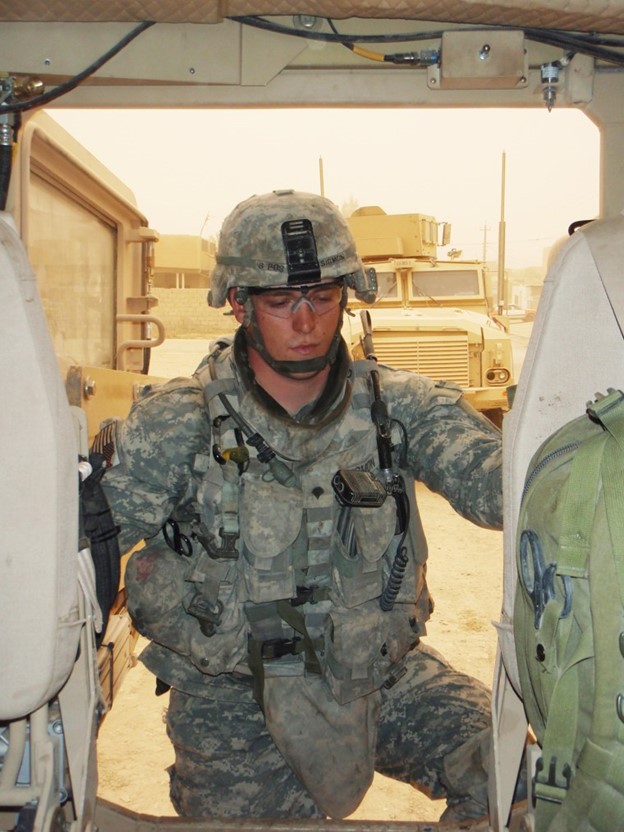 Joseph Sigmon did two tours of duty as an artilleryman in Iraq and Afghanistan and was decorated for his work training Afghan soldiers in how to operate artillery. Courtesy Joseph Sigmon

Service members are routinely exposed to noise levels up to 150 decibels in training and combat, according to experts.

The service members’ lawsuits followed a 2018 settlement 3M struck with the Justice Department, which alleged the company knowingly supplied the U.S. military with earplugs that were defective because they were too short to fit properly for all users. The government also contended that 3M failed to disclose the design defect to the military. 3M paid $9.1 million to settle the matter and did not admit wrongdoing.

Aearo, which made other products as well, devised an initial version of the Combat Arms product in 1998. It had two sides: One end was supposed to provide total hearing protection, while the other end allowed a user to hear conversations nearby. 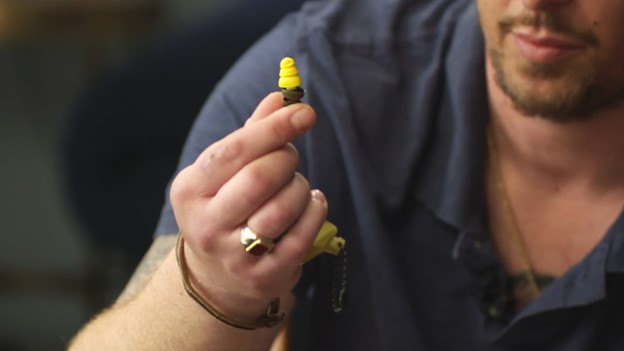 In early 2000, documents from the lawsuits show, Aearo tested the earplugs and found that they were too short to fit all users properly and could loosen in place. The company determined that manipulating the plugs could provide a good fit, the documents show.

3M said Aearo “clearly communicated this issue to the military.” But plaintiffs point to a 2019 deposition produced in the litigation, in which a 3M division scientist who worked with the military on the earplugs said he had no “paper documentation” showing that the military was advised of the earplugs’ loosening problem.

In battling the earplug cases, 3M contended that its status as a government contractor protected it from liability for service members’ hearing losses. 3M’s lawyers acknowledged to NBC News that it had no traditional contract with the military for the Combat Arms earplugs. Instead, the company argued that if an agreement existed between the government and a manufacturer containing adequate specifics of what the military wanted in a product, that is effectively a contract and the company should be protected from litigation under the government contractor defense. Lawyers for the plaintiffs disputed this view.

Aearo Technologies made its filing in U.S. Bankruptcy Court for the Southern District of Indiana, which will supervise the case and the trust fund set up by the company. 3M said it was also committing $240 million to fund projected expenses related to the case, adding that it will provide “additional funding if required under the terms of the agreement.”

In a conference call with investors on Tuesday morning, CEO Roman said, “We want to do right for veterans.” But he also said 3M stands by the performance of the earplugs. 3M’s stock rose 6% on the news.

Gretchen Morgenson is the senior financial reporter for the NBC News Investigative Unit. A former stockbroker, she won the Pulitzer Prize in 2002 for her “trenchant and incisive” reporting on Wall Street.